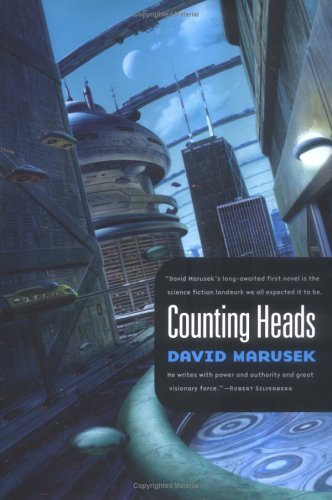 Counting Heads is David Marusek's extraordinary launch as an SF novelist: The year is 2134, and the Information Age has given rise to the Boutique Economy in which mass production and mass consumption are rendered obsolete. Life extension therapies have increased the human lifespan by centuries. Loyal mentars (artificial intelligence) and robots do most of society's work. The Boutique Economy has made redundant ninety-nine percent of the world's fifteen billion human inhabitants. The world would be a much better place if they all simply went away. Eleanor K. Starke, one of the world's leading citizens is assassinated, and her daughter, Ellen, is mortally wounded. Only Ellen, the heir to her mother's financial empire, is capable of saving Earth from complete domination plotted by the cynical, selfish, immortal rich, if she, herself, survives. Her cryonically frozen head is in the hands of her family's enemies. A ragtag ensemble of unlikely heroes join forces to rescue Ellen's head, all for their own purposes. Counting Heads arrives as a science fiction novel like a bolt of electricity, galvanizing readers with an entirely new vision of the future. It's the debut of the year in SF.

Marusek is unstintingly generous in his speculations, which are all entertainingly wild yet convincingly realistic. -- Paul Di Filippo, Scifi.com

When David was writing short stories, he was an exciting writer. Now that he's onto novels, he's practically a force of nature. -- Cory Doctorow, BoingBoing

...Counting Heads is a worthwhile and impressive debut filled with wonder and excitement. -- John, SFSignal

This is an engaging and thought-provoking read. -- David Moldawer, Dragon Page