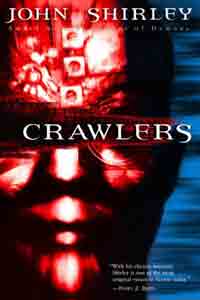 In a secret government lab somewhere in Nevada, a young scientist cowers in darkness...waiting, listening, and calculating his chances of surviving the unspeakable carnage that has left him trapped and alone. Or almost alone.

Soon after, a covert military operation ...cleanses... all traces of a top-secret project gone horrifically wrong.

Three years later, it begins again...when the quiet of a warm autumn night in a sleepy California town is shattered by a streak of light across the sky, the thunder of impact, and the unleashing of something insidious. Spreading, multiplying, and transforming everything in its path, this diabolical intelligence will not be denied until the townsfolk...and eventually, all living things...are conquered. Until they are all crawling. . . .

Shirley's latest is as terrifying as it is thought-provoking. -- Paul Goat Allen, BookPage

Crawlers is a Book that is accessible and entertaining to a broad audience (more commercial) while remaining intelligent and retaining more than surface meaning (as he's always done). -- Paula Guran, DarkEcho Horror

...just because it's formulaic doesn't make it a bad story, and I expect Shirley is really planning to pitch it as a B-Horror movie, which might be fun to see. -- Ernest Lilley, SF Revu