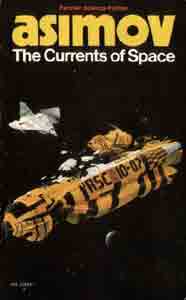 The Currents of Space

Synopsis of The Currents of Space

What he knew about the future could destroy a solar system...

...so they seared the memory from Rik's brain, and left him for dead, a whimpering, thumb-sucking half-child.

Then Valona, a young, lonely peasant girl, adopted him. And gently turned him into a man again.

Hunted by kings and spies, caught in a web of interplanetary intrigue, Rik struggles with his own numbed mind and his unknown enemy in a desperate and one-sided race with time.

Reviews of The Currents of Space

It is not one of Asimov's better novels, but not nearly as bad as The Stars, Like Dust -- John H. Jenkins, Jenkins... Spoiler-Laden Guide to Isaac Asimov