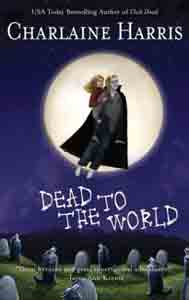 Dead to the World

Synopsis of Dead to the World

Sookie Stackhouse is a small-town cocktail waitress in small-town Louisiana. She's pretty. She does her job well. She keeps to herself and has only a few close friends because not everyone appreciates Sookie's gift. She can read minds. Not exactly every man's idea of date bait. Unless they're undead. Vampires and the like can be tough to read - just the kind of guy Sookie's been looking for.

Maybe that's why, when she comes across a naked vampire on the road home from work, she doesn't just drive on by. Turns out he hasn't a clue as to who he is, but Sookie does. It's Eric, still as scary and sexy - and dead - as the day she first met him. But now that he has amnesia, Eric is sweet, vulnerable, and in need of Sookie's help - because whoever took his memory now wants his life. Sookie's investigation into why leads straight into a dangerous battle among witches, vampires and werewolves. But there could be a greater danger to Sookie's heart - because the kinder, gentler Eric is very difficult to resist...

Reviews of Dead to the World

Fortunately, someone kicked some sense into me and I...m afraid I may well be hooked on Harris... fiction for life. -- Lisa DuMond, MEviews

Fans will enjoy this offbeat read that combines elements of several genres to ensure that the world of Charlaine Harris seems real, one bite at a time. -- Harriet Klausner, ParaNormal Romance Reviews

If you...ve been following this Series, Dead To The World is another fun read. -- Nicky Lynch, SFRevu

Overflowing with vampires, werewolves, shape-shifters, and witches, Dead to the World epitomizes escapist literature -- a little bit of fantasy, a little bit of mystery, and a whole lot of fun. -- Paul Goat Allen, Barnes and Noble

I've enjoyed each of the Southern Vampire novels but DEAD TO THE WORLD may just be the best. -- BooksForABuck