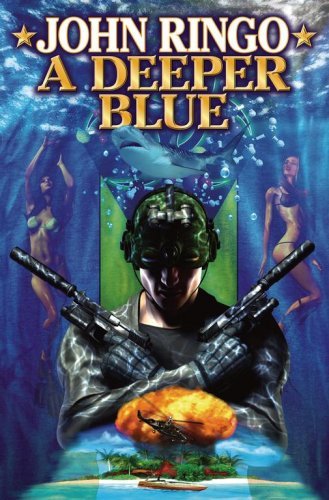 Synopsis of A Deeper Blue

Heart-sick over the deaths of so many of his Keldara followers, and one in particular, former SEAL Mike Harmon, hero of Ghost, Kildar and Choosers of the Slain, decides to sit this one out. WMDs headed for the US no longer matter to the Kildar. But when his best friend and intel specialist both are seriously wounded in an ambush aimed at him, the Kildar gets his gameface back on. Mike has always said that he's not a nice guy, and he's about to prove it to a boatload of terrorists and Colombian drug dealers. Set in the Bahamas and Florida Keys, A Deeper Blue is a fast moving thriller that never slows down from the first page. With the return of some old faces, the action-packed novel proves, once again, the adage that sometimes it takes some very bad people to do good things.

Reviews of A Deeper Blue

...he's such a damn good writer that once you pick up one of his Books it has a tendency to stick to your hands like superglue until the last bad guy has been killed, the last beer has been drunk, the last terrorist plot has been foiled, and the last beautiful babe been, um rescued. -- Ernest Lilley, SFRevu

This is a great saga from a master. -- Harriet Klausner's Review Archive