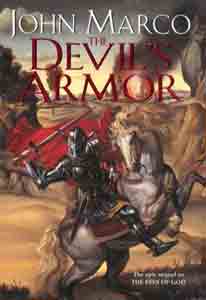 Synopsis of The Devil's Armor

Akeela the Mad, King of Liiria, is dead. His once great kingdom lies in ruins. Akeela's great library, the Cathedral of Knowledge, still stands, and holed up in its fortresslike structure the remainder of Liiria's elite fighting troop make their final stand, desperately defending their land against usurpers. For Jazana Carr, the Diamond Queen, whose wealth has bought her the world's most powerful mercenary army, has overrun Norvor, and is now poised at Liiria's border.

Lukien, the Bronze Knight of Liiria, was once the kingdom's greatest champion. Consumed by guilt over his betrayal of Akeela, he now lives in self-imposed exile in the far southern desert. As penance for his past actions, Lukien has devoted himself to the protection of the mountain fortress of Grimhold, and now wears one of the magical amulets known as the Eyes of God. Word of Grimhold's healing magic has reached far and wide, and people from the war-torn lands in the north have come streaming across the vast southern desert. The Mistress of Grimhold has been overwhelmed by the requests for help...requests she can't grant, as the magical spirits that inhabit Grimhold and lend its inhabitants their healing talents are too few for the task.

But Grimhold itself harbors a threat that could far outweigh all others. Deep in the lowest levels of this ancient mountain stronghold, behind locked doors and magical seals, stands a suit of armor unlike any other. For millennia it has stood erect on its dais as if filled by an invisible body, pulsing with preternatural dark light, huge, black, horned and spiked, with a death's head helmet and rings of black chain mail. Indestructible, beautiful in its monstrous power, this armor is the greatest and most infamous creation of a sorcerer who has been dead for thousands of years. Dead, and yet his murderous spirit has lived on in The Devil's Armor, waiting for the proper time to lure an innocent victim into its evil sway...

Reviews of The Devil's Armor

The Devil's Armor is one of Marco's finest achievements. -- Paul Goat Allen, Barnes and Noble

There is a sense of epic about this novel, as in the best of fantasy novels, yet you get a sense of Marco holding back, not revealing his whole hand, in terms of what can be told in this world. -- Rob H. Bedford, SFFWorld

A complex and thought-provoking fantasy with a kick that will leave you gasping for more! -- Vegar Holmen, The Alien Online