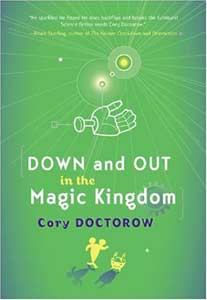 Down and Out in the Magic Kingdom

Synopsis of Down and Out in the Magic Kingdom

Jules is a young man barely a century old. He's lived long enough to see the cure for death and the end of scarcity, to learn ten languages and compose three symphonies...and to realize his boyhood dream of taking up residence in Disney World.

Disney World! The greatest artistic achievement of the long-ago twentieth century. Now in the care of a network of volunteer "ad-hocs" who keep the classic attractions running as they always have, enhanced with only the smallest high-tech touches.

Now, though, it seems the "ad hocs" are under attack. A new group has taken over the Hall of the Presidents and is replacing its venerable audioanimatronics with new, immersive direct-to-brain interfaces that give guests the illusion of being Washington, Lincoln, and all the others. For Jules, this is an attack on the artistic purity of Disney World itself. Worse: it appears this new group has had Jules killed. This upsets him. (It's only his fourth death and revival, after all.) Now it's war: war for the soul of the Magic Kingdom, a war of ever-shifting reputations, technical wizardry, and entirely unpredictable outcomes.

Reviews of Down and Out in the Magic Kingdom

It's a classic example of a group of humans finding meaning in going through the motions. -- Ernest Lilley, SFRevu

Not being a theme park aficionado myself, the charms of the Magic Kingdom fail to ensnare moi. But the dirty little war for Whuffie and artistic control in the Magic Kingdom that Jules dives into is a hoot. -- Eva Wojcik-Obert, Fantasitca Daily

The story line is kept low- keyed, which adds a realistic feel to the plot, but also leaves the audience wanting more action. -- Harriet Klausner, BooksNBytes

...one of the funniest and cleverest debuts in a giant sea turtle's age. -- Paul Di Filippo, Scifi.com

Although his writing is good, and his world creation is well thought out, I think the Book is being over-praised. -- William Alan Ritch, Scifi Dimensions

While ''Down and Out in the Magic Kingdom'' can be a lot of irreverent fun, it can also come off clumsy. -- Taylor Antrim, NY Times

A fast, funny, smart, clever Book which entertains so well that it's only upon reflection that its surprising sophistication and depths become evident. -- Tim Pratt, Strange Horizons