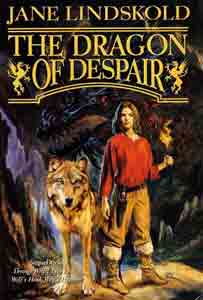 The Dragon of Despair

Synopsis of The Dragon of Despair

The sequel to Through Wolf's Eyes and Wolf's Head, Wolf's Heart

With Through Wolf's Eyes and Wolf's Head, Wolf's Heart, Jane Lindskold introduced us to young Firekeeper, one of the most appealing heroines in modern fantasy. Raised far from humans by smart, language-using wolves, then brought back to the court of Hawk Haven, Firekeeper has had to learn to cope with human society. And as it turns out, for one raised amidst intelligent social carnivores, the intrigues of the human pack aren't all that unfamiliar.Now Melina Shield, the beautiful, unscrupulous, and thoroughly discredited sorceress whose power-hungry intrigues have already made so much trouble for Firekeeper, is once again using her power to cloud men's minds. She has induced the ruler of New Kelvin to marry her. This is bad news all round.

It's particularly bad news for Firekeeper. Melina has never abandoned her schemes to gain power through the use of forbidden ancient sorcery. And the leaders of the royal beasts who watch over this world have given Firekeeper -- and her intelligent wolf companion, Blind Seer -- the responsibility of stopping her.

Reviews of The Dragon of Despair

The Dragon of Despair has a lot to offer the fantasy reader. -- Cindy Lynn Speer, Fantastica Daily

I was really let down by this Book. -- Donna Jones, SF Crowsnest