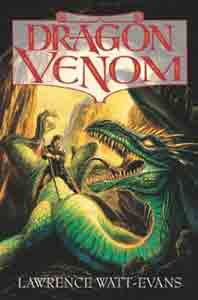 After many years of peace in the Lands of Men, there came Dragon Weather: a wave of incredible heat, oppressive humidity, dark angry clouds . . . and dragons. Dragons with no remorse, no sympathy, no use for humans; dragons who destroyed an entire village and everyone in it. Everyone, that is, except the young boy Arlian. Orphaned and alone, Arlian was captured by looters and sold as a mining slave. He finally escaped, fueled by years of hatred and a personal vow to bring justice to all who had wronged him.

After killing those who enslaved him, Arlian sought out The Dragon Society, whose sworn purpose was to stand against the dragon menace. It was there, among his peers, that Arlian discovered he is humanity's best hope for defeating the dragons . . . permanently.

Now, Arlian seeks his final vengeance: death to all of dragonkind. But as he begins to destroy the evil beasts, wild magic seeps into the Lands of Men, sowing chaos and destruction in its wake. Will Arlian's all-consuming quest for justice consume humanity as well? The answer may lie within his ancient foe's most lethal weapon: Dragon Venom

Watt-Evans manages to take a lot of common elements and twist them around, creating an adventure that is very different and quite intriguing. -- Cindy Lynn Speer, Fantastica Daily

When the story line turns to action-packed sorcery skirmishes, fans of the Author will take delight, but a strong entry could have been superlative if the ethics question remained front and center throughout rather than in and out. -- Harriet Klausner, Under the Covers

The pace and action are spectacular. -- Pauline Morgan, SF Crowsnest