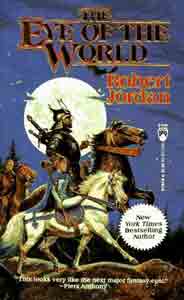 The Eye of the World

Synopsis of The Eye of the World

Set in a world where two kinds of magic exist, one female and the other male, the Wheel of Time Series features as its hero Rand, who begins the first volume as a simple shepherd. A visitor soon sends Rand on an epic journey to unite the people of his planet against the Dark One, who threatens vast destruction. Rand's quest takes him through a dazzling array of meticulously detailed alien cultures and such unforgettable characters as the mysterious and lovely Egwene, the sorceress Moiraine, and Moiraine's companion, Lan.

Reviews of The Eye of the World

Though I acknowledge that Jordan's prodigious flow of words has produced much that is admirable, this saga cannot avoid specific criticisms: mainly, that each volume is criminally overlong, and that this first novel in the Series, despite several clever and interesting touches, is nothing more or less than the purest formula fantasy, predictable at almost every turn and woefully lacking in the dramatic tension and conflict necessary to hold a reader through hundreds of thousands of words of plot. -- T. M. Wagner, SFReviews.net