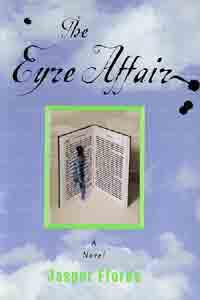 Synopsis of The Eyre Affair

Great Britain circa 1985: time travel is routine, cloning is a reality (dodos are the resurrected pet of choice), and literature is taken very, very seriously. Baconians are trying to convince the world that Francis Bacon really wrote Shakespeare, there are riots between the Surrealists and Impressionists, and thousands of men are named John Milton, an homage to the real Milton and a very confusing situation for the police. Amidst all this, Acheron Hades, Third Most Wanted Man In the World, steals the original manuscript of Martin Chuzzlewit and kills a minor character, who then disappears from every volume of the novel ever printed! But that's just a prelude . . .

Hades' real target is the beloved Jane Eyre, and it's not long before he plucks her from the pages of Bronte's novel. Enter Thursday Next. She's the Special Operative's renowned literary detective, and she drives a Porsche. With the help of her uncle Mycroft's Prose Portal, Thursday enters the novel to rescue Jane Eyre from this heinous act of literary homicide. It's tricky business, all these interlopers running about Thornfield, and deceptions run rampant as their paths cross with Jane, Rochester, and Miss Fairfax. Can Thursday save Jane Eyre and Bronte's masterpiece? And what of the Crimean War? Will it ever end? And what about those annoying black holes that pop up now and again, sucking things into time-space voids . . .

Reviews of The Eyre Affair

Jasper Fforde writes a zany, wild and weird affair that is part science fiction, part alternate history, part classic literature and all amusing satire that never stops to look back at what is ripped besides a page or two. -- Harriet Klausner, BooksNBytes

Ms. Thursday Next, the lead character in AFFAIR may not sell as many copies of her adventure as Harry Potter does, but she is just as delightful of a character. -- Chris Wyatt, Cinescape

All in all a very good first novel worth adding to any library. -- Nigel, Booklore

The story is unique, fun to read, and a real treat for anyone who happens to love science fiction just as much as they do Victorian Literature. -- Rochelle Caviness, Large Print Reviews

There are moments of triteness when Fforde reaches for social commentary on the evils of war or for psychological depth on the nature of grief. But mostly it's just rip-roaring fun, the kind of cerebral silliness that Brits can do so well while American comedians are doing bug-eyed double takes and kicking each other in the groin. -- Ron Charles, The Christian Science Monitor

What holds the Book together is the sensible, appealing presence of Thursday Next. -- Michael Berry, San Francisco Chronicle

Fforde's use of inside jokes and pop-culture references is fun, but not overdone. -- Whitney Matheson, USA TODAY

...Dear Reader, suspend your disbelief, find a quiet corner and just surrender to the storytelling voice of the unstoppable, ever-resourceful Thursday Next -- Michael Dirda, The Washington Post

The Eyre Affair is a grand Book, full of action, adventure, and a smidge of romance. -- Lola Sparks, Italics SF Review

This is one of the best Books I've read this year, and I the others in the Series (there are four so far) are on my shopping list. -- BooksForABuck