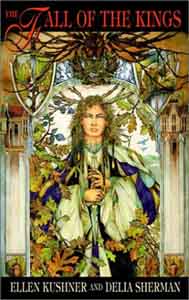 The Fall of the Kings

Synopsis of The Fall of the Kings

Generations ago the last king fell, taking with him the final truths about a race of wizards who ruled at his side. But the blood of the kings runs deep in the land and its people, waiting for the coming together of two unusual men, Theron Campion, a young nobleman of royal lineage, is heir to an ancient house and a modern scandal. Tormented by his twin duties to his family and his own bright spirit, he seeks solace in the University. There he meets Basil St. Cloud, a brilliant and charismatic teacher ruled by a passion for knowledge...and a passion for the ancient kings. Of course, everyone now knows that the wizards were charlatans and the kings their dupes and puppets. Only Basil ins not convinced...nor is he convinced that the city has seen its last king...

Reviews of The Fall of the Kings

The only real stumble comes with the late introduction of Jessica, whose resolution of several plot elements seems a trifle glib in execution, and whose depiction as colorful freebooter smacks of recent and popular typecasting, or, looking back to an earlier generation, maybe Maureen O'Hara on the Spanish Main. -- William Thompson, SF Site

Delia Sherman and Ellen Kushner's new Book, The Fall of the Kings is one of the bawdiest and most intellectually stimulating novels of the year -- Gavin J. Grant, BookPage

Go out now and buy The Fall of the Kings -- Theodora Goss, Strange Horizons

The Fall of the Kings is an experience not to be missed. -- Harriet Klausner, The Best Reviews