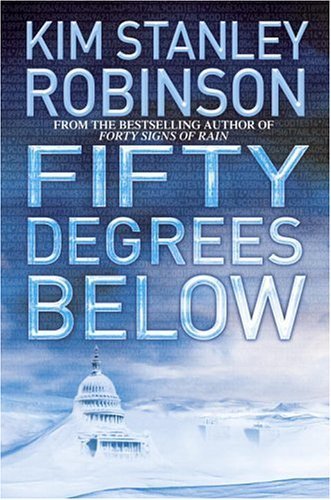 Synopsis of Fifty Degrees Below

Bestselling, award-winning, Author Kim Stanley Robinson continues his groundbreaking trilogy of eco-thrillers...and propels us deeper into the awesome whirlwind of climatic change. Set in our nation's capital, here is a chillingly realistic tale of people caught in the collision of science, technology, and the consequences of global warming...which could trigger another phenomenon: abrupt climate change, resulting in temperatures...

When the storm got bad, scientist Frank Vanderwal was at work, formalizing his return to the National Science Foundation for another year. He...d left the building just in time to help sandbag at Arlington Cemetery. Now that the torrent was over, large chunks of San Diego had eroded into the sea, and D.C. was underwater.

Shallow lakes occupied the most famous parts of the city. Reagan Airport was awash and the Potomac had spilled beyond its banks. Rescue boats dotted the saturated cityscape. Everything Frank and his colleagues in the halls of science and politics feared had culminated in this massive disaster. And now the world looked to them to fix it.

Whatever Frank can do, now that he is homeless, he...ll have to do from his car. He's not averse to sleeping outdoors. Years of research have made him hyperaware of his status as just another primate. That plus his encounter with a Tibetan Buddhist has left him resolved to live a more authentic life.

Hopefully, this will prepare him for whatever is to come....

For even as D.C. bails out from the flood, a more extreme climate change looms. With the melting of the polar ice caps shutting down the warm waters of the Gulf Stream, another Ice Age could be imminent. The last time it happened, eleven thousand years ago, it took just three years to start.

Once again Kim Stanley Robinson uses his remarkable vision, trademark wry wit, and extraordinary insight into the complexity between man and nature to take us to the brink of disaster...and slightly beyond.

Reviews of Fifty Degrees Below

His straightforward presentation of alternatives to our present ruinous behavior can threaten to become oppressive, but Robinson's evocation of his imperiled world, the particulars of his frozen, half-feral Washington and the novel's global perspective manage to offer a counterbalance. -- Gregory Feeley, The Washington Post

As ever, Robinson is both intelligent and poetic, with insights second to none. But here we have just too little sweep of action. -- Carlos Aranaga, ScifiDimensions

What sets Fifty Degrees Below apart is the seriousness of its message, and the frightening likelihood that we are headed toward some such ecological disaster right now. -- Greg L. Johnson, SFSite