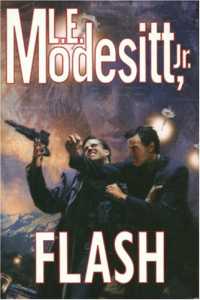 Return to the future of Archform: Beauty. In the twenty-fourth century, Earth is vastly changed. Ecological and biological catastrophe have raged across the planet, but for the survivors, it is a world of plenty. Even the poorest live in abundance, and the upper class--the ascendant--command technological marvels.

Ten years ago, Jonat deVrai was a rising star in the Marines. But he shocked his superiors by walking away from the Corps after witnessing atrocity and hypocrisy during the Reclamation of Guyana. Starting his life over, he established himself as the world's expert on the effectiveness of "prod"--product placement, the only advertising which viewers will allow through the sophisticated filters they all use against unwanted intrusions on their electronic link networks. Prod, reinforced with sublims and the "res"--resonant frequencies, a form of sonic branding--is the wave of the future.

Jonat now advises multinational corporations on their prod campaigns, his busy life only occasionally disturbed by vivid flashbacks to his military years. Then his comfortable world is upset when the Centre for Societal Research approaches him to study the effects of res and prod on political campaigns.

After a res-heavy political rally for Laborite Republican Senatorial candidate Juan Carlismo, armed thugs jump deVrai in a parking garage. A day later, a sniper ambushes him. What looked like a safe, lucrative contract has suddenly turned dangerous. The stakes raise further when deVrai foils a remote-controlled cydroid assassination attempt on a Popular Democrat candidate. Cydroids built from deVrai's stolen DNA are turning up dead throughout NorAm.

Suspicionand conspiracy race around Jonat. Who wants him dead? Candidate Juan Carlismo's use of prod is skirting the limits of legality. The Centre has its own obscure agenda and may want deVrai as a martyr. The terrorist group PAMD is targeting ascendents in deVrai's family. And one of his clients is known for holding legendary grudges - could he have gone over the edge?

With his life on the line, deVrai must sort flash from fact before it's too late.

Flash is a blend of all-out thriller and thoughtful social, political, and technological exploration that that gets into your mind in a way even res and prod could never match.

Anyone who enjoys the hard-edged speculations of Wil McCarthy and the noir paranoia of Richard Morgan will find in this Book a fine fusion of the two forms. -- Paul Di Filippo, Scifi.com

Though all over the place, science fiction fans will fully enjoy this wild, futuristic, crime thriller which condemns big government and big business as being an incestuous team interested in the furthering of their own personal needs at the cost of the masses. -- Harriet Klausner, Review Center

The new Book does not ask questions. It states the need for violence as unquestionable fact. That is a very dangerous thing to do, as the Author and his hero should well know. -- Cheryl Morgan, Emerald City

A Book to be enjoyed by anyone who likes mystery, conspiracy theory and crime. -- Joules Taylor, SFCrowsnest