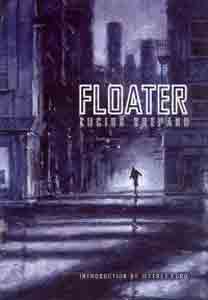 Detective William Dempsey of the New York Police Department is having a bad time of it. Having endured -- along with his brothers in blue, Manny Pinero and Evan Haley -- a months-long homicide trial for the inadvertant (or was it?) shooting of Haitian immigrant, Israel Lara, he's been abandoned by his fiancee, deemed unfit for duty, and is sinking into an oblivion of vodka and pills. Then there's that little problem with his eye.

A floater, his optometrist says. Nothing to worry about. Microscopic bits of protein adrift in the humor that cast shadows on the retina. But Dempsey's worried. For one thing, instead of dispersing, the floater continues to grow, occluding his vision and causing disturbing hallucinations. For another, his partner, Pinero, is behaving strangely and there's the suggestion that the floater may not be a harmless opthamological incident but an emblem that signals a peculiar form of vengeance and the imminence of a voodoo god. As he tries to determine what is happening, Dempsey's investigation leads him from rave culture to santeria ceremonies in storefront temples and, ultimately, to a circumstance that may have cosmic implications and a truth that lies hidden in the deepest sub-basements of his own mind.

This is a horror novel that should have an appeal beyond the regular horror fans, it does not contain excessive gore nor out of this world grotesquerie that can limit the appeal to non-core readers. -- Steve Mazey, The Eternal Night

On the surface of it, this is a fairly-routine supernatural police procedural, but the story is transcended by Shepard's careful and convincing characterisation, by his attention to the minuet of detail, and by the beauty of his language. -- Lavie, Dusk

Floater is a dark and disturbing novel, designed to confuse and cause intrigue and, like all good designs, it works. -- Katie McGivern, SF Crowsnest