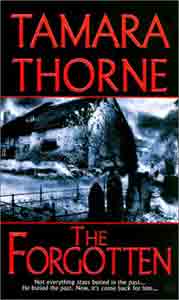 Synopsis of The Forgotten

Will Banning survived a childhood so rough, his mind has blocked it out almost entirely - especially the horrific day his brother Michael died, a memory that flickers on the edge of his consciousness as if from a dream.

Now, as a successful psychologist, Will helps others dispel the fears the past can conjure. But he has no explanation for the increasingly bizarre paranoia affecting the inhabitants of Caledonia, California, many of whom claim to see terrifying visions and hear ominous voices - voices that tell them to do unspeakable things?.

As madness and murderous impulses grip the coastal town, Will is compelled to confront his greatest fear and unlock the terrifying secret of his own past in a place where evil isn't just a memory - it's alive and waiting to strike?

Reviews of The Forgotten

Tamara Thorne is at the top of her game with some of her best writing to date. -- Paula Sahraoui, Horror World