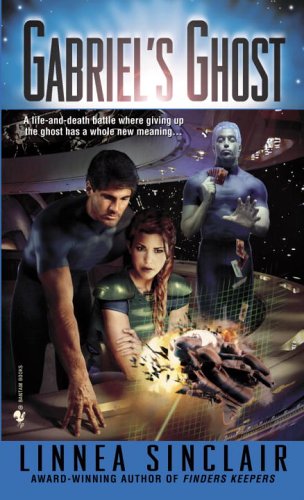 After a decade of piloting interstellar patrol ships, former captain Chasidah Bergren, onetime pride of the Sixth Fleet, finds herself court-martialed for a crime she didn't commit...and shipped off to a remote prison planet from which no one ever escapes. But when she kills a brutal guard in an act of self-defense, someone even more dangerous emerges from the shadows.

Gabriel Sullivan...alpha mercenary, smuggler, and rogue...is supposed to be dead. Yet now this seductive ghost from Chaz's past is offering her a ticket to freedom...for a price. Someone in the Empire is secretly breeding jukors: vicious and uncontrollable killing machines that have long been outlawed. Gabriel needs Chaz to help him stop the practice before it decimates Imperial space. The mission means putting their lives on the line...but the tensions that heat up between them may be the riskiest part of all.

With its interstellar action and its clashing leads, Gabriel's Ghost has much to offer fans of science fiction, of romance and of the crossbreed known in SF circles as SF romance. Series. -- Cynthia Ward , Scifi.com

I'm telling you, get your hands on this one, folks--I think you'll find that, just like me, you will NOT be disappointed. -- Shawn P. Madison, The Eternal Night

I was ecstatic at the level of involvement I experienced with this Book. -- Cyndi Witkus, In The Library Reviews