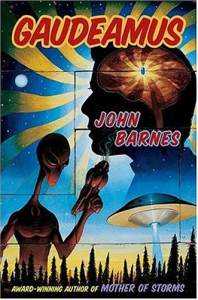 Shatter the line between fiction and fantasy...

The life of an award-winning novelist probably bears more resemblance to "normal" than most fans would want to believe. But every once in awhile, strange things are bound to erupt around those most equipped to document them... so imagine what renowned science fiction writer John Barnes might do when he finds himself in one of the wildest, most rollicking hard-SF adventures to hit print in years.

Barnes' college friend Travis Bismark always brought back plenty of great stories from his job as an industrial spy. This time, over a few beer- and coffee-fueled chat sessions, Travis unravels a tale about his current case too tall for even an SF Author to believe: a Gaudeamus machine that bends physics in order to make possible both teleportation and time travel, and how it gets stolen--twice; a grad student-cum-prostitute who deals in telepathy-inducing drugs that let her "download" top-secret documents from her client's brains, a romp through Colorado and New Mexico during which each episode and character is more bizarre than the last; and the internet meme that seems to tie it all together.

Barnes' playful commentary on Travis' story and his own life as a SF writer and drama teacher, interspersed with their everyday interactions with a group of funny, compelling friends, is related in a surprising and non-traditional narrative that blurs the line between fact, fiction, and metafiction.

Gaudeamus is predictable and has plot holes you could drive a truck through. But it is roaring good fun to read if you...re the kind of reader who can suspend belief and just enjoy yourself. -- Gayle Surrette, SFRevu

Though SF fundamentalists will take exception (not portrayed too highly), fans of way out craziness will enjoy the Gaudeamus tale and would want a prescription of goddies (of curse the FDA would declare them as harmful because people might have fun). -- Harriet Klausner's Review Archive