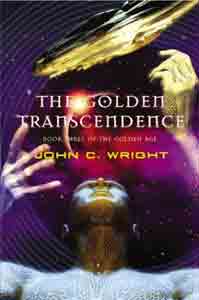 The Golden Transcendence : Or, The Last of the Masquerade

Synopsis of The Golden Transcendence : Or, The Last of the Masquerade

The end of the Millennium is imminent, when all minds, human, posthuman, cybernetic, sophotechnic, will be temporarily merged into one solar-system-spanning supermind called the Transcendence. This is not only the fulfillment of a thousand years of dreams, it is a day of doom, when the universal mind will pass judgment on all the races of humanity and transhumanity.

The mighty ship Phoenix Exultant is at last in the hands of her master; Phaethon the Exile is at her helm. But the terrible truth has been revealed: he is being hunted by the agents from a long-lost dead star, the eerie and deadly Lords of the Silent Oecumene, whose super-technology plumbs depths even the all-knowing Earthmind cannot fathom.

Humanity will be helpless during the Golden Transcendence. Phaethon's enemies plan to use the opportunity to destroy the population of the Inner System, man and machine alike. To do this, they must take control of Phaethon's beloved starship and turn her unparalleled power to warlike uses. Phaethon's memories are incomplete - but he knows a spy for the Silent Ones is already aboard. And when the all-encompassing Mind of the Golden Transcendence wakes - who will it condemn? Which future will it chose? Are Phaethon's dreams of star-flight about to revolutionize the Golden Age into an age even more glorious than gold, or will they kindle the first open war fought across the immensity of interstellar space?

Reviews of The Golden Transcendence : Or, The Last of the Masquerade

Readers of the first two volumes in the trilogy, ''The Golden Age'' and ''The Phoenix Exultant,'' will know what to expect next: jargon-rich, high-tech shoot-'em-ups alternating with jargon-rich, high-flown debates about the meaning of life, the limits of logic, the nature of consciousness and so on. -- Gerald Jonas, The New York Times

The overall effect of Wright's immensely convoluted tale of a future where godlike powers are the common birthright of every individual is to make the reader feel she is truly witnessing the cataclysmic upheavals of an old exotic culture where many of the premises we take for granted have been swept away. -- Paul Di Filippo , Scifi.com

It all got a bit confusing, there was much too much talking going on, and then, suddenly, with a single knife stroke, as it were, the Author stepped in and restored sensibility (and action) to the plot and we were off again on what has been a tremendous debut and remarkable example of the quality of the "New" Space Opera. -- Ernest Lilley, SFRevu

Haunting and triumphant... everything a closing novel should be. -- Inchoatus