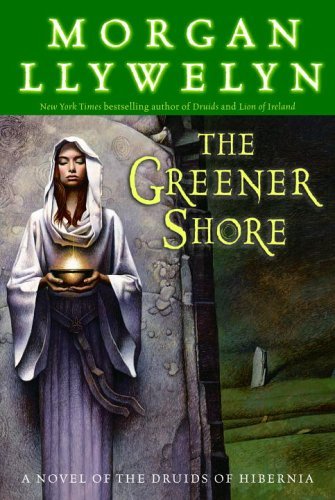 Synopsis of The Greener Shore

At last, the haunting sequel to Morgan Llywelyn's phenomenal epic Druids. The Greener Shore unfurls the story of a brave and mystical people who learned to manipulate the forces of nature...in order to control magic.

As druids in Celtic Gaul, they had been the harmonious soul of their tribe, the Carnutes. But when Julius Caesar and his army invaded and conquered their homeland, the great druid Ainvar and his clan fled for their lives, taking with them the ancient knowledge. Guided by a strange destiny, they found themselves drawn to a green island at the very rim of the world: Hibernia, home of the Gael.

Here they would depend for survival on an embittered man who had lost his faith...and a remarkable woman who would find hers. Burning with hatred of the Romans, Ainvar can no longer command his magic. But his mantle falls on unexpected shoulders. In a beautiful, war-torn land of numerous kingdoms and belligerent tribes, Ainvar and his beloved wife, Briga, struggle toward an uncertain future. Their companions include the volatile Onuava, widow of their fallen chieftain; Lakutu, Ainvar's dark and mysterious second wife; Ainvar's son, Dara, who seems more drawn to poetry than to combat; and the ...Red Wolf,... the young warrior who is as close as kin and is determined to find Ainvar's missing daughter.

Other forces are at work in Hibernia as well'the spirits that haunt the island, forces older than even the magic of the druids. Through them Ainvar seeks his redemption . . . as Briga seeks her rendezvous with history.

Filled with the deep feeling, stunning detail, and rich characters that made Druids a masterwork, The Greener Shore is a superb saga of an amazing world and its wondrous ways...a much-awaited novel that will delight all the devotees of this admired Author.

Reviews of The Greener Shore

Fans of Ancient historical tales with low keyed fantasy elements will enjoy Morgan Llywelyn's superb novel and demand a follow-up to see how much the Carnute descendents change from the old ways. -- Harriet Klausner, SFRevu