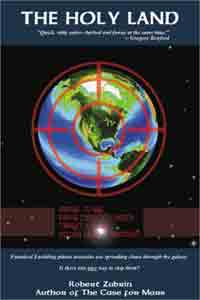 Synopsis of The Holy Land

What if Americans were the terrorists, and a more civilized galactic superpower found it necessary to put us down? What if contemporary Christian ministers preached salvation through murder of pagan aliens, and the US government recruited children suicide-assassins for this purpose? If you were an American living in such a crazed society, and you knew the retribution such actions could provoke, what would you do? If you were a civilized outsider, how would you deal with these insane, yet potentially human, creatures?

Reviews of The Holy Land

This Book is rather like a blend of William Tenn, Harry Harrison, Robert Sheckley, Ron Goulart, Christopher Anvil and Keith Laumer, but weakened by its second- or third-generation status. -- Paul Di Filippo, Scifi.com

Whether you read this Book as a simple work of fiction or as a discourse on current events, you will find that your time was well spent. -- Rochelle Caviness, Large Print Reviews

Leave the righteousness of your chauvinism on the cover of Robert Zubrin's The Holy Land, because everything will be turned inside out, on its head, in this thought-provoking parody of a hard science fiction & political science story about aliens from outer space, good & evil, patriotism & freedom. -- Rebecca Brown, RebeccasReads.com

This is intelligent science fiction and political satire at its best. -- Thomas Lindaman, CommonConservative.com

The only criticism is that the Author may have tried to do too much in a reasonably short novel. -- Mark Graham, The Rocky Mountain News