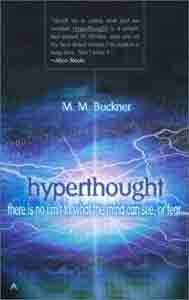 Storm-blasted. Radioactive. Unlivable. This is Earth, 2125.

On an Earth humanity has all but destroyed, only the forbidding poles support life. The north belongs to the Coms, elite corporations dominating an oppressed workforce. In the south live the last truly free people on earth. One of them is Jolie Sauvage, tour guide to earth's thrillingly toxic surface...extreme entertainment for rich Net stars like Jin Sura.

Son of a Com CEO, Jin is everything Jolie hates. Until she discovers his mission: to overthrow the tyranny of the north by unlocking the hidden potential of his brain with experimental neurosurgery. Jin's father knows what forces such experiments can unleash, what secrets they can reveal...and he's prepared to hunt Jin and Jolie across Earth's ravaged landscape. But even if they can outrun him...even if they can survive the chaos of an impending civil war...

Are they any match for the reality-altering nightmares within Jin's psyche?

HYPERTHOUGHT is a cutting edge science fiction that will appeal to fans of plenty of action. -- Harriet Klausner, AllScifi.com

It's a smart and sassy first novel -and if it's any indication of her talent, M.M. Buckner will be around for a long time. -- John C. Snider, Scifi Dimensions