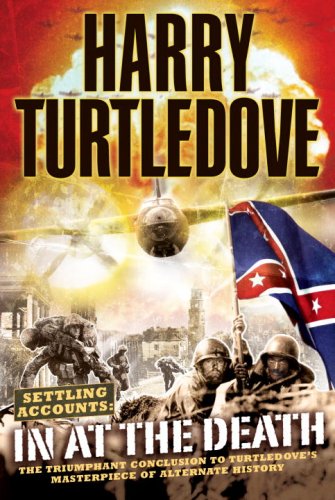 In at the Death

Synopsis of In at the Death

Franklin Roosevelt is the assistant secretary of defense. Thomas Dewey is running for president with a blunt-speaking Missourian named Harry Truman at his side. Britain holds onto its desperate alliance with the USA's worst enemy, while a holocaust unfolds in Texas. In Harry Turtledove's compelling, disturbing, and extraordinarily vivid reshaping of American history, a war of secession has triggered a generation of madness. The tipping point has come at last.

The third war in sixty years, this one yet unnamed: a grinding, horrifying Series of hostilities and atrocities between two nations sharing the same continent and both calling themselves Americans. At the dawn of 1944, the United States has beaten back a daredevil blitzkrieg from the Confederate States...and a terrible new genie is out of history's bottle: a bomb that may destroy on a scale never imagined before. In Europe, the new weapon has shattered a stalemate between Germany, England, and Russia. When the trigger is pulled in America, nothing will be the same again.

With visionary brilliance, Harry Turtledove brings to a climactic conclusion his monumental, acclaimed drama of a nation's tragedy and the men and women who play their roles...with valor, fear, and folly...on history's greatest stage.

Reviews of In at the Death

The tenth and apparently final Book in the Settling Accounts alternate history saga is a fabulous conclusion to a great Series. -- Harriet Klausner's Review Archive

I enjoyed this conclusion to the Series. -- Bill Lawhorn, SFRevu