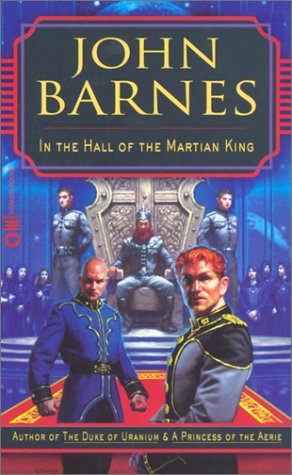 In the Hall of the Martian King

Synopsis of In the Hall of the Martian King

A Martian monarch has taken possession of a priceless relic: the lifelog diary of the mysterious messiah who founded the Wager, the religion that forms the basis of all interstellar society. The Hive Intel conglomerate wants the lifelog and hires Jak to get it. It's a simple job, until other spies-including Ambassador Dujuv, Uncle Sib, and Jak's evil ex-girlfriend-arrive on Mars and turn the assignment into a wild ride of mind control, murder, and looming interplanetary war. For the lifelog contains a devastating secret that can overturn the status quo of whole worlds-a secret that Hive Intel will suppress at all costs. In the past, Jak has completed missions by betraying his friends. Now in order to succeed, Jak Jinnaka must betray the entire human race...

Reviews of In the Hall of the Martian King

It's interesting and intriguing, yes. But suspenseful? Not so much. -- J.B. Peck, Scifi.com

A wonderful mixture of espionage, sf, and an exploration of both friendship and politics, this Book is filled with enough adventure...and an deliciously ironic twist...to please readers of any genre. -- Cindy Lynn Speer, MostlyFiction.com