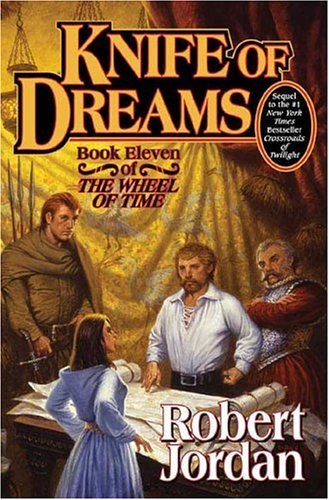 Synopsis of Knife of Dreams

The Wheel of Time turns, and Robert Jordan gives us the eleventh volume of his extraordinary masterwork of fantasy.The dead are walking, men die impossible deaths, and it seems as though reality itself has become unstable: All are signs of the imminence of Tarmon Gai...don, the Last Battle, when Rand al'thor, the Dragon Reborn, must confront the Dark One as humanity's only hope. But Rand dares not fight until he possesses all the surviving seals on the Dark One's prison and has dealt with the Seanchan, who threaten to overrun all nations this side of the Aryth Ocean and increasingly seem too entrenched to be fought off. But his attempt to make a truce with the Seanchan is shadowed by treachery that may cost him everything. Whatever the price, though, he must have that truce. And he faces other dangers. There are those among the Forsaken who will go to any length to see him dead--and the Black Ajah is at his side....Unbeknownst to Rand, Perrin has made his own truce with the Seanchan. It is a deal made with the Dark One, in his eyes, but he will do whatever is needed to rescue his wife, Faile, and destroy the Shaido who captured her. Among the Shaido, Faile works to free herself while hiding a secret that might give her her freedom or cause her destruction. And at a town called Malden, the Two Rivers longbow will be matched against Shaido spears.Fleeing Ebou Dar through Seanchan-controlled Altara with the kidnapped Daughter of the Nine Moons, Mat attempts to court the woman to whom he is half-married, knowing that she will complete that ceremony eventually. But Tuon coolly leads him on a merry chase as he learns that even a gift can have deep significance among the Seanchan Blood and what he thinks he knows of women is not enough to save him. For reasons of her own, which she will not reveal until a time of her choosing, she has pledged not to escape, but Mat still sweats whenever there are Seanchan soldiers near. Then he learns that Tuon herself is in deadly danger from those very soldiers. To get her to safety, he must do what he hates worse than work....In Caemlyn, Elayne fights to gain the Lion Throne while trying to avert what seems a certain civil war should she win the crown....In the White Tower, Egwene struggles to undermine the sisters loyal to Elaida from within....The winds of time have become a storm, and things that everyone believes are fixed in place forever are changing before their eyes. Even the White Tower itself is no longer a place of safety. Now Rand, Perrin and Mat, Egwene and Elayne, Nynaeve and Lan, and even Loial, must ride those storm winds, or the Dark One will triumph.

Reviews of Knife of Dreams

...now that it appears the Author is back on track, and focused on taking the story to its conclusion, one can once again recommend this Series, without too many reservations, and highly to its intended audience. -- William Thompson, SFSite

As well as long-running, this Series is complex, with a huge number of characters, and varied major and minor story strands to track. However it's well worth the effort, a must read for fantasy lovers. -- Hilary Williamson, BookLoons

Knife of Dreams is a strong, strong addition to the Series. -- Jason Denzel, Dragonmount

With the Wheel of Time, Robert Jordan has proved himself a superb Creator of a true fantasy epic. -- Bridlington Free Press