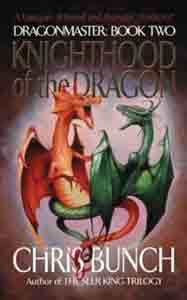 Knighthood of the Dragon

Synopsis of Knighthood of the Dragon

There is no gallantry left in the long struggle between Deraine and Sagene and their arch-rival Roche. The fight is no longer for victory-but for survival. And in the midst of the slaughter stands Hal Kailas, Dragonmaster. His squadrons of dragons soar above the carnage and sorcery, dealing death to the enemies of Roche, but even Hal has his weaknesses... For now Hal has been captured by a deadly foe-and without the power of the Dragonmaster, the people of Roche face certain destruction. In this compelling sequel to Storm of Wings, Hal finds himself pitted against an enemy that not even a flight of dragons may be able to destroy.

Reviews of Knighthood of the Dragon

Knowledge of recent European history will add greatly to your enjoyment of this Series, though it stands very nicely on its own. -- Barry Newton, SFRevu

Too little original thought, too many hackneyed situations and characterizations. -- Kirkus, Reprinted on Monsters and Critics