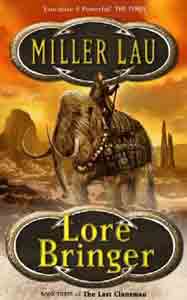 Synopsis of Lore Bringer - Book Three of The Last Clansman

uch has changed in the Otherworld of Sutra since the events of Dark Thane. The Fine and the Sidhe now share Sutra with a new race - the Shoreth. Although they have always been a semi-nomadic, warlike people, the Shoreth are finally ready to end to their travels. To some, however, giving up the warrior's path is unthinkable, and in the brilliant but arrogant General Zarrus they find a champion who has influence over the emperor himself. If Zarrus has his way, the fragile peace between the three races will be shattered forever. Meanwhile, in Arizona, a Navajo elder is haunted by dreams and visions he cannot understand, scenes of battles outside his experience. In desperation, he sends his nephew, Michael Talloak, known to his tribe as Yiska, to Scotland to perform a Spirit Walk at the battle site. There Yiska raises the ghost of the highland warrior, Malky MacLeod, and learns of the existence of the Otherworld and the connection between the two planes of reality. The source of his uncle's visions, it seems, lies in Sutra, and in order to cross over, he and Malky will need the help of Duncan Talisker. But Talisker, worn out by living two lives in two very different worlds, has cracke

Reviews of Lore Bringer - Book Three of The Last Clansman

What Lau has neatly done is transform this Book from the Guy Kay style of fantasy a more Charles de Lint style, instead of the land being all, it is the stories which animate the world and give it meaning. -- Iain Emsley, SFRevu

This IS a joy to read (as a quote on the back of the Book proclaims for the Author's earlier work), Miller Lau's prose is so easy to read, and her characters are so rich and friendly to the reader. -- Steve Mazey, The Eternal Night