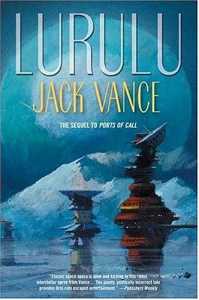 Rejoin the adventures of Myron Tany, rebellious scion of a wealthy family, as he tours the Galaxy on a very questionable interstellar freighter, in a crew of actors, musicians, thieves and other ne'er-do-wells.

Against the backdrop of the Gaean Reach, first the story of Jaro Fath unfolds: from wildling orphan to spaceship captain, a tale of adventure and discovery wittily told. A boy haunted by memories of his dead mother's terror, Jaro's life is directed by an inner voice he can't account for ... until he returns to Kammerwelt, described in The HandBook of the Planets as the fourth world in the entourage of Robert Palmer's Star, drifting in a far-flung sector of the galaxy known as the Dragon's Maw. Then Myron Tany, in thrall to his zany aunt Dame Hester Lajoie, sets off in her space yacht to find a faraway fountain of youth. The captain flatters Hester agreeably, but when Myron points out that the man is a swindler, he is marooned on an inhospitable planet with barely his passage home. Thus he is given the perfect opportunity to live out his childhood fantasies of intergalactic adventure, alien encounters and exotic romance. Or starve to death. Luckily, the tramp cargo vessel Glicca is just then in need of a supercargo, and Myron is it.

The master's way with exotica has never been stronger. -- Paul Di Filippo, Scifi.com

Lurulu is a fine ending to the story begun in Ports Of Call, and should really only be read as a set: as a standalone volume, it's thin fare, both metaphorically and physically. -- David Hecht, SFRevu

More a satirical Series of vignettes, LURULU entertains the audience as if Seinfeld and crew were in space. -- Harriet Klausner, ParaNormal Romance Reviews

...Lurulu offers not story, but wisdom, lovingly wrapped in the distinctive, ironic voice of Jack Vance, which alone is worth the price of admission. -- Matthew Hughes, SFSite