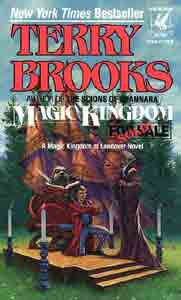 After Ben Holiday purchased Landover, he discovered the magic kingdom had some problems. The Barons refused to recognize a king and the peasants were without hope. To make matters worse, Ben learned that he had to duel to the death with the Iron Mask, the terrible lord of the demons--a duel which no human could hope to win....

If I were fourteen I would probably have marked this much higher than I have done... -- Chrissi, Booklore

The humor is wonderful, yet the Book weaves a fascinating tale as well. -- Jandy's Reading Room

...this Book just left me feeling empty and like I wasted my time and energy in reading the story. -- TJ, SF Site

The humor and the exciting plot twists make for very enjoyable reading. -- Deanna Johnson, Yet Another Book Review Site

...the story line has humour and the characters are - despite their generic roles - rounded and very alive. -- Thomas Ros...n, Fantasy Webgroup

The best story lines I have ever read... for Saturday morning cartoons. -- Tooner, SF Site