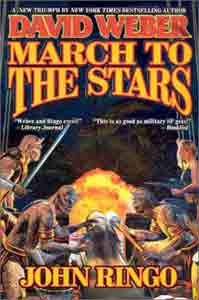 March to the Stars

Synopsis of March to the Stars

Another Sunny Day on MardukRoger Ramius Sergei Alexander Chiang MacClintock has had a really bad year.

Bad enough to be the spoiled rotten fop of a prince no one wanted or trusted.

Worse to be sent off on a meaningless diplomatic mission, simply to get you out from underfoot, with a bodyguard of Marines who loathe and despise you.

Worse yet to be assumed dead and marooned for almost a year on a hell-hole planet while you and those same Marines fight your way through carnivorous beasts, murderous natives, and perpetual rain to the only starport. . . which is controlled by the Empire's worst enemies.

Worst of all to have discovered that you were born to be a warrior prince. One whose bodyguards have learned the same lesson. And one haunted by the deaths of almost a hundred of your Marines... for what you know now was an unnecessary exercise in political expediency.

A warrior prince who wants to have a few choice words with your Lady Mother, the Empress of Man.

But to have them, you, your surviving Marines, and your Mardukan allies must cross a demon-haunted ocean, face a civilization that is "civilized" in name alone and "barbarians" who may not be exactly what they seem, and once again battle against impossible odds. All so that you can attempt to somehow seize a heavily defended spaceport and hijack a starship to take you home.

Yet what neither Roger, nor the Marines, nor his allies know is that the battle to leave Marduk is only the beginning. And that words with Roger's mother will be hard to come by.

But that's all right. Because what the Galaxy doesn't know is that it's about to receive a fresh proof of an old truism:

You don't mess with a MacClintock

Reviews of March to the Stars

A few Author-intrusive digressions into the nature of religion and whether abortion constitutes a type of infanticide similar to that encouraged by the Baal faith and discussions of twenty-ninth century archeological discoveries pull the reader out of the fantasy without adding anything to the plot, but these are forgettable once we get back into the action. -- BooksForABuck