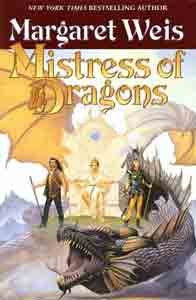 Synopsis of Mistress of Dragons

Mistress of Dragons is the first volume in an epic fantasy trilogy entitled The Dragonvald. Here is a world where men and dragons coexist amid political intrigue and dark magic, where the uneasy balance of power between the two is on the verge of becoming undone, threatening to unleash waves of destruction that will pit humans against humans as well as dragons against men for the domination of the world. Humanity's very survival is at risk . . . .

The power to hold the chaos at bay, the terrible secret that maintains the balance, rests in the hands of a new and inexperienced

Reviews of Mistress of Dragons

The intrigues of the dragon Parliament and the attempt to make the creatures morally ambiguous and alien were the strongest elements of this Book, but the story was for the most part lifeless and had little impact on me. -- Alyx Dellamonica, Scifi.com

Weis's strong writing and interesting characters more than compensate for several plot holes that would otherwise detract from the reader's enjoyment... -- BooksForABuck

All together this is a well done volume, and the ending is such that you...ll be really looking forward to finding out what happens next. -- Cindy Lynn Speer, Fantastica Daily