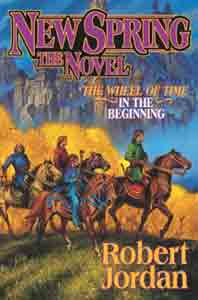 Synopsis of New Spring: The Novel

For three days battle has raged in the snow around the great city of Tar Valon. In the city, a Foretelling of the future is uttered. On the slopes of Dragonmount, the immense mountain that looms over the city, is born an infant prophesied to change the world. That child must be found before the forces of the Shadow have an opportunity to kill him. Moiraine Damodred, a young Accepted soon to be raised to Aes Sedai, and Lan Mandragoran, a soldier fighting in the battle, are set on paths that will bind their lives together. But those paths are filled with complications and dangers, for Moiraine, of the Royal House of Cairhien, whose king has just died, and Lan, considered the uncrowned king of a nation long dead, find their lives threatened by the plots of those seeking power.

Reviews of New Spring: The Novel

New Spring has the advantage of a wealth of soon to be familiar characters to veterans of the Wheel of Time Series and a kind of new car smell attraction to readers new to the party. -- Bruce Wallace, SF Revu

This is The Wheel of Time at its best: political intrigue, powerful characters, dangerous magic and even more dangerous secrets, a Book sure to win new loyal followers for Jordan's epic Series. -- John Green, Bookpage

Long time fans should enjoy it, and new fans will likely get caught up. -- Jason Denzel, Dragonmount.com

...it felt like reading The Eye of the World for the first time again. -- Hilary Williamson, Bookloons

Fans of the Series will enjoy this tale that patches up some issues and opens up new questions, but still feels out of sequential time with I think ten ...wheels... already published and two or three spins to go. -- Harriet Klausner, AllScifi.com

...enough interest is maintained to make the novel an entertaining read, if not up to the standard of Jordan's best, so I happily grant it a place on my 'more highs than lows' shelf. -- Martin Jenner, SFCrowsNest

Author Robert Jordan has become one of the top names in modern fantasy by delivering a solid tale that combines adventure, fascinating world-building, and character development. NEW SPRING delivers on all of these elements and makes a highly entertaining read. -- BooksForABuck