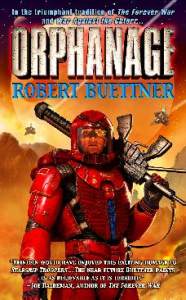 MANKIND MUST WIN...OR PERISHI would be the first human to touch the moon since the days when major-league baseball used wooden bats. As I waited I thought of something. "Metzger? How do we pee?" "Use the little condom thingy in the leg. You hooked it up, didn't you?"Air bled from the lock."What thingy?""Sorry. Should've told you. Just hold it."He opened the hatch. Before me another world, as dead and white as bones, stretched to a black horizon. I turned around, felt for the descent ladder's first rung, then stepped into airless nothing cold enough to freeze helium. I hopped off the bottom rung into the Sea of Fertility's dust, then focused my vision on the object a half mile away.Peeing my pants was the least of my worries.

In the triumphant tradition of The Forever War and War Against the Chtorr...

When earth needs heroes, whom will we call to valor? When flares streaking across the sky herald massive destruction, who will defend us? When mankind's enemy is beyond our worst imagination, who will be our champions? Will we pick the brightest and the toughest? Or the ones with nothing left to lose?

WAR IS AN ORPHANAGE

Mankind's first alien contact tears into Earth: projectiles launched from Jupiter's moon, Ganymede, vaporize whole cities. Under siege, humanity gambles on one desperate counterstrike. In a spacecraft scavenged from scraps and armed with Vietnam-era weapons, foot soldiers like eighteen-year-old Jason Wander...orphans that no one will miss...must dare man's first interplanetary voyage and invade Ganymede. They have one chance to attack, one ship to attack with. Their failure is our extinction.

The story is well written, the characters and situation gripping. -- Theresa Ichino, Bookloons

If you liked any of the Books it draws from, you should like this too ... unless you ask more of it than it can give. (1959). -- Ernest Lilley, SFRevu

Anyone who can keep me not only interested in a military SF Book, but also interested enough to read it in less than THREE DAYS is doing something right. -- Evo Terra, The Dragon Page