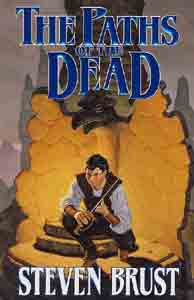 The Paths of the Dead

Synopsis of The Paths of the Dead

Two hundred years after Adron's Disaster, in which Dragaera City was accidentally reduced to an ocean of chaos by an experiment in wizardry gone wrong, the Empire isn't what it used to be. Deprived at a single blow of their Emperor, of the Orb that is the focus of the Empire's power, of their capital city with its Imperial bureaucracy, and of a great many of their late fellow citizens, the surviving Dragaerans have been limping through a long Interregnum, bereft even of the simple magic and sorcery they were accustomed to use in everyday life.

Now the descendants and successors of the great adventurers Khaavren, Pel, Aerich, and Tazendra are growing up in this seemingly diminished world, convinced, like their elders, that the age of adventures is over and nothing interesting will ever happen to them. They are, of course, wrong . . . .

For even deprived of magic, Dragaerans fight, plot, and conspire as they breathe, and so do their still-powerful gods. The enemies of the Empire prowl at its edges, inscrutable doings are up at Dzur Mountain...and, unexpectedly, a surviving Phoenix Heir, young Zerika, is discovered-setting off a chain of swashbuckling events that will remake the world yet again.

Reviews of The Paths of the Dead

For the fan of this Series (started really in The Phoenix Guards, the equivalent of The Three Musketeers), this Book is indispensable. For a novice, the novel is probably confusing, as it assumes quite a bit of background knowledge. -- David Brukman, In Other Worlds

...most of the Generic Fantasy writers who think that a few "thee"s and "thou"s and "wast"s and the odd word-order inversion will make for old-sounding speech, Brust knows what he's doing and does a fine job of playing with speech patterns. -- Mark L. Olson, The New England Science Fiction Association, Inc.

Using the presentation style made famous in, The Three Musketeers, (some may say, made famous by Chip and Dale the chipmunks) Brust creates a unique, often humorous and always interesting prose. -- Yet Another Book Review Site

This was a great read, probably the best of the Series to date. -- Chad Orzel, The Library of Babel: A Book Log