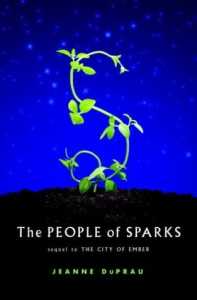 The People of Sparks

Synopsis of The People of Sparks

The People of Sparks picks up where The City of Ember leaves off. Lina and Doon have emerged from the underground city to the exciting new world above, and it isn't long before they are followed by the other inhabitants of Ember. The Emberites soon come across a town where they are welcomed, fed, and given places to sleep. But the town's resources are limited and it isn't long before resentment begins to grow between the two groups. When anonymous acts of vandalism push them toward violence, it's up to Lina and Doon to discover who's behind the vandalism and why, before it's too late.

Reviews of The People of Sparks

Less claustrophobic and more ambitious than its predecessor, "The People of Sparks" is a deftly constructed fable, its message universal and sensitively rendered. -- The San Francisco Chronicle

Occasionally I was reminded a little too strongly that this is a children's Book -- Sondra Eklund, SonderBooks

The first Book, The City of Ember, was a fun but unexceptional story -- city underground is failing, children have to find a way out before it's too late. This sequel, on the other hand, goes in a different direction -- less action, more thought-provoking. -- Matt Berman, Common Sense Media