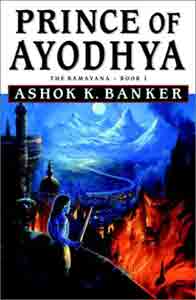 Prince of Ayodhya (The Ramayana, Book I)

Synopsis of Prince of Ayodhya (The Ramayana, Book I)

From critically acclaimed Indian Author Ashok Banker comes an original epic fantasy based on the ancient Hindu classic The Ramayana--written in the tradition of J.R.R. Tolkien, Robert Jordan, and Terry Goodkind. Embodying all the elements of a classic epic fantasy, the ancient Hindu mythological tale The Ramayana is full of sweeping adventure, gods and monsters, and a questing prince. Now, Author Ashok K. Banker adapts The Ramayana into an impressive epic fantasy. The hero of the first Book is young Rama, heir to the throne of Ayodhya. When two powerful rakshasa--demons who have raised a formidable army of anti-gods--plan to take over the land of humans as well, the legendary seer-mage Vishwamitra is forced out of a 240-year-long retreat to call upon Rama for his help in the eternal battle of Good against Evil.

The original Ramayana was written in Sanskrit by a reformed thief-turned-sage named Valmiki, possibly as long ago as 2,000 B.C. Now, with breathtaking imagination and brilliant storytelling, Indian writer Ashok Banker has recreated this magnificent tale for modern readers everywhere. In the ancient city of Ayodhya, a young prince has a terrifying apocalyptic vision. Shortly after, an ancient seer arrives at the city gates with an equally terrifying prophecy. Two men brought together by extraordinary events. Two men who will journey together to the ends of the world. The Ramayana has begun. Find out more about this title and others at www.orbitBooks.co.uk

Reviews of Prince of Ayodhya (The Ramayana, Book I)

I have no hesitation in recommending you bask in the warm waters of one of the sources of world mythology, made more accessible to the modern, Western reader by Banker's excellent narrative interpretation. -- Joe Gordon, The Alien Online

If you like straight forward simple, fantasy then gives it ago. -- Phil Jones, SFCrowsnest

The first volume of any new Series has to satisfy readers while leaving them hungry for more, and Prince of Ayodhya succeeds on both counts. -- Pamela Sargent, Scifi.com

If you enjoy Epic Fantasy and are looking something with a bit of a different twist or flavor, pick up The Prince of Ayodhya. -- Rob H. Bedford, SFFWorld

Judging by this first offering, Banker's oeuvre-in-the-making is likely to become an essential cornerstone of fantasy. -- Claude Lalumi...re, Infinity Plus (orginally in the Montreal Gazette)