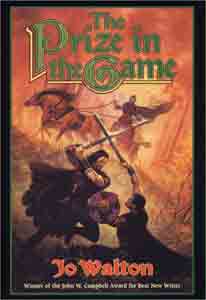 The Prize in the Game

Synopsis of The Prize in the Game

When a friendly competition leads to the death of a beloved horse and incurs the wrath of the Horse Goddess, the kingdoms of the island of Tir Isarnagiri are doomed to suffer. As the goddess's curse chases them down the years, four friends destined for kingship-Conal, Emer, Darag, and Ferdia-are forced into conflict as their countries build towards war.

Matters are complicated when Emer and Conal fall in love and dream of escaping together from the machinations of their respective families. But Conal and Ferdia are rivals for the High Kingship of the island, and Conal cannot simply leave. The contest between them will lead to a visionary quest on a mountain sacred to the gods-and terrifying to men.

Yet Emer faces an even greater struggle. For when war finally comes, Emer has two choices: perform her duty to the homeland to which she owes everything, or protect the one she loves and be branded a traitor forever. The path she takes will become the stuff of legend and forever alter the destiny of Tir Isarnagiri. Set in the world of Jo Walton's previous novels, The King's Peace and The King's Name, this Book takes us to a shining era of dark powers, legendary heroes, and passionate loves-all of them ruled by the hand of Fate.

Reviews of The Prize in the Game

The more I read, the more I became enthralled with the characters, plots, and sub-plots. -- Detra Fitch, Huntress Book Reviews

THE PRIZE IN THE GAME is a well-crafted novel full of fantasy, war, betrayal and romance. -- Thea Candee, The Romance Reader's Corner

The story line slowly heats up so that the audience knows how each of the quintet interacts with one another, but once the plot boils it never cools off until the climax that sets in motion another sequel. -- Harriet Klausner, The Best Reviews

Its a fast read and definitely hard to put down. -- Books For A Buck

Whether you've enjoyed the Author's previous Books or not, The Prize in the Game can stand on its own as an engrossing tale of historical fantasy, not to be missed. -- Hilary Williamson, BookLoons