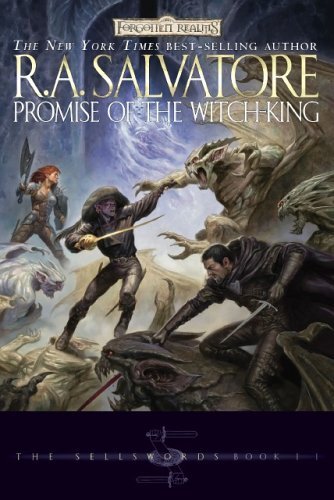 Promise of the Witch King

Synopsis of Promise of the Witch King

Promise of the Witch-King is an original hardcover novel that follows Servant of the Shard, Book I in The Sellswords Series. The story tracks the adventures of assassin Artemis Entreri and his dark elf companion Jarlaxle as they venture through the wild, demon-haunted Bloodstone Lands. Before long, they discover themselves caught in the middle of a struggle between powerful forces that would like nothing more than to see them dead...or worse. But Entreri and Jarlaxle are no ordinary assassins ... caught between the ghost of a power-mad lich, and the righteous fury of an oath-bound knight, they have never felt more at home.

A classic fantasy tale with broad moral themes and plenty of action, Promise of the Witch-King explores the consequences of tampering with death, the bonds of friendship, and the essence of good and evil.

Reviews of Promise of the Witch King

If you're looking for some pure excitement of the sword and sorcery type, you will definitely want to get your hands on PROMISE OF TE WITCH-KING. -- BooksForABuck

R.A. Salvatore is a fantastic world builder who creates characters that readers come to care about and puts them in storylines filled with action and intrigue. -- Harriet Klausner, BooksNBytes