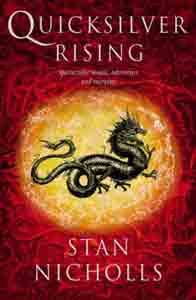 Powerful new epic fantasy trilogy from Stan Nicholls, the British Author of the internationally acclaimed ORCS Series. The empires of Rintarah and Gath Tampoor are squared against each other, each continually spying for weaknesses in the other. In the middle huddles the small island state of Bhealfa, ruled by a demented Prince who is obsessed with the idea that he can outrun death. Everywhere, magic underpins the social order. Different classes enjoy different qualities of magic; from meagre charms for the destitute, to grand conjurations impossible to distinguish from reality for the rich. But the most skilful and expensive spells are kept by the Authorities and used to control the entire population. Reeth Caldason is among the last of his kind. His people, the Qalochians, a race of natural warriors, were brutally massacred decades ago. Reeth is cursed with immortality, forced to wander the world, seeking revenge for his tribe and a cure for his magical affliction. Under the floating Palace of the mad Prince of Bhealfa he comes across other outlaws and is drawn into the Resistance movement, assisting those who have suffered under the dictatorships of the two massive empires. Reeth is promised that in return for his help, the underground society will help him find a cure for his affliction. But the political situation and the magic nature of the world are inextricably connected. Bring one down and the other will be destroyed -- the world will change forever and Reeth's curse will never be lifted.

This is an unapologetic fantasy tale that enthusiastically embraces all the finest elements of the form. -- Juliet E McKenna, The Alien Online

Easily as much fun as you'd expect. -- Jon Courtenay Grimwood , The Guardian

Quicksilver Rising is an enjoyable romp which offers so much for the attentive reader. It repays careful reading but is also a hugely enjoyable read . -- Iain Emsley, SFRevu

Easily as much fun as you'd expect. -- Jon Courtenay Grimwood, The Guardian