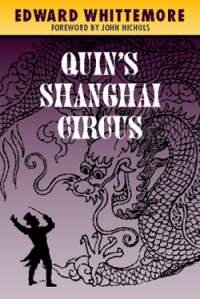 On a winter's day, some twenty years after the end of the Second World War, a huge, smiling fat man wearing a black bowler hat and a military greatcoat and known as Geraty walked into a bar in the Bronx bearing his name and picked the pocket of a young man named Quin, thereby setting in motion a Series of events that was to culminate in the largest funeral procession held in Asia since the thirteenth century.

Quin was to embark on a journey to the East where he would discover the truth about his parents and how they, together with a pederastic Catholic priest, the one-eyed stoic chief.of the Japanese secret police, and a Russian anarchist turned sensualist (fluent in more than eighty languages, confidant of Trotsky and Chou-En-Lai, an erudite translator of Japanese pornography) succeeded in uncovering Japan's military secrets and changing the course of the Second World War.

In his quest, Quin crosses paths with many incredible characters including Mama, a prostitute who made love to 10,000 men before she was 25, and Mama's brother, a man as evil as she is good and employee of Kikuchi-Lotmann the world's third most powerful gangster. Quin learns that it was in the Shanghai of the 1930's that his origins and the destinies of those he encounters first collided. There, amid dazzling debauchery, opium rights to a province had been lost at a game of cards, women given fortunes in exchange for an evening of pleasure, and human depravity practised on a hitherto unknown scale. There, too, the Shanghai circus held its last grisly performance.

Hypnotically written and packed with invention, Quin's Shanghai Circus has a profound sense of the Far East and forces us to revaluate the relationship between Japan and the West. A constantly shifting kaleidoscope of images and scenes, the novel with its opium-dream plot has been compared in America with The Alexandria Quartet.