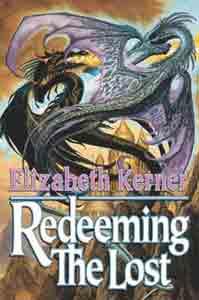 Synopsis of Redeeming the Lost

The prophecies are coming true and the ancient race of the Kantri-or true dragons-have come back to the world of Men. It was through the actions of Young Lanen Kaelar that the Kantri were reminded of the larger world. It was bravery (and a mad belief in the old tales) that caused the young woman to start a perilous journey to find the great dragons of legend. In doing so, she found not only the reality of the myth but her own true love. He was the great Dragon King, an immensely powerful creature out of time who ultimately chose life over death, a puny mortal form rather than the power of a kingship to be with this most extraordinary woman. As he is Dragon in Man's form, the being known as Varien has risked much to stay by Lanen's side.

Their haven destroyed, the Kantri have chosen instead of seeking a new home to return to the land of their greatest defeat and to the fear of the people who rejected their aid so long ago. They bring ancient power and knowledge and the Kantri have come to see what the "littlings" have made of their world.

And much of what they find distresses them. For humans have squandered much of their heritage, the small dragons that were left behind are little more than cattle...and there are those who do remember the ancient ways...and have allied themselves with the race of demons who long to destroy all the world. The Kantri are disturbed and look to Varien and Lanen help them redeem what has been lost so long ago and make the world right again.

But Lanen is captured by the human demon-master Berys, who seeks to corrupt the ancient prophecy. He will try to use Lanen's new-found powers to gain control of the very fabric of the universe and in doing so, secure the demon forces of the otherworld and rule forever.

It is up to her true love Varien and one of the most unlikely alliances ever seen to rescue Lanen. And if Varien fails, not only will Lanen's life and the fates of his beloved Kantri hang in the balance. For the stage is now set for a confrontation between the forces of light and darkness...and if the good fail, not only will the Kantri fail but the human world will be doomed as well...

Reviews of Redeeming the Lost

A worthy and perfectly stand alone conclusion to the Series that holds wonders for teens and adults alike. -- Cindy Lynn Speer, Fatastica Daily

The story was loaded with action and was emotionally compelling in many places. -- Linda, Romantic Science Fiction and Fantasy

This is a terrific conclusion to a strong fantasy trilogy in which good vs. evil with both sides construing that the ancient prophecy meets their needs. -- Harriet Klausner, BooksNBytes

The writing style is excellent, although I can't tell you why. I know bad writing when it bites me and this Book is well written. -- Madeline Yeh, SFRevu