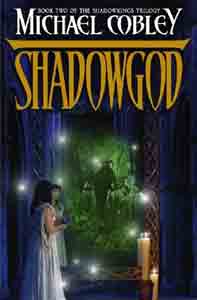 SHADOWGOD continues the epic tale, begun in SHADOWKINGS, of resolve and sacrifice, and a world teetering on the brink of endless, terrible night A harsh winter is settling in across the land and the Shadowkings' deepest, darkest plans are hatching... the worst is yet to come. Ikarno Mazaret, now Lord Regent, still grieves over the death of his beloved, the mage Suviel. Ranging forth from the city of Besh-Darok, he takes ever more perilous risks. Tauric has been crowned Emperor yet feel increasingly powerless to influence events. Despair begins to taint his every decision. Keren Asherol remains haunted by her shattering encounter with one of the Daemonkind, while her twin, the mirrorchild Nerek, is dogged by sinister omens. And far to the north the Shadowking Byrnak broods on his towertop. Mistrustful of his fellow-Shadowkings and harried by a ghostly fragment of the Lord of Twilight, he knows he must utterly crush the Imperial remnants and their allies, despite the powers of the goddess Earthmother.

One fantasy sequel that certainly does not disappoint -- Vegar Holmen, The Alien Online