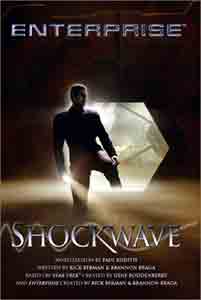 The Paraagan deep-space colony was just another first contact, unusual only in two aspects: it was a matriarchal society, and the planet's upper atmosphere was filled with a highly volatile gas. But the officers of Enterprise knew how to handle their shuttlepod, and they understood the Paraagan landing protocols. As the shuttlepod descended into the planet's atmosphere, they closed the plasma vents, certain that nothing could escape and ignite the gas.

Thirty-six hundred colonists were vaporized in the blast. Every building, every living thing, everything on the surface was destroyed in the fireball. But how could it have happened? Every reading shows that the pod's vents were shut. Nevertheless, it could only have been the Enterprise crew who caused the destruction.

Recalled to Earth, Archer knows that the Vulcan High Command has convinced Starfleet of what they have long insisted. Humans are not ready for deep-space exploration. True, it was an accident. But considering the catastrophic loss of life, Starfleet must agree that deep-space exploration must wait just a little longer, perhaps another twenty years...or longer.

But these were not the events as history recorded them. No one died. Enterprise was never recalled. This is the startling information offered by the mysterious Crewman Daniels -- who claims to be from the thirty-first century and a foot solider in the temporal cold war. With a renewed sense of determination, Archer sets out to prove Enterprise's innocence, armed with the knowledge that if he succeeds, his ship will be safe, his future secure. But time is a swiftly moving river in whose deadly rapids Enterprise and her captain are now caught. Is there anything one very small starship can do against these forces?

Put briefly, the resolution that returns Captain Archer to his home century and timeline from a ravaged and Timefleet-free future, just Doesn't. Make. Sense. -- Mike McKeown, The Alien Online