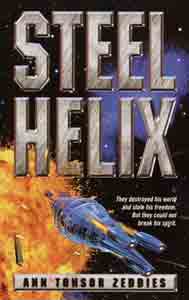 Piers Rameau, a brilliant geneticist, was offered the chance to help design mankind's replacement...Original Man, a smarter, stronger, swifter race based on manipulated human DNA. But Rameau refused, and chose to follow his own path.

Now Kuno Gunnarsson, creator of Original Man and Rameau's would-be employer, is dead...but his superior creation lives on. And one faction of Original Man is determined to wrest control of the galaxy from the inferior race. A brutal attack destroys both Rameau's home planet and the satellite that has become his world. One tragic casualty is Dakini, a fragile, genetically altered dancer who had become Rameau's reason to live.

The sole survivor, he finds himself a prisoner of Gunnarsson Prime, a clone of the original creator, on board the Jumpship Langstaff. Against his will, Rameau is enlisted as the ship's wartime medical officer. As a doctor, he swore an oath to do no harm. As a man, he swears blood vengeance on the inhuman killers who destroyed everything he ever loved . . . .

About the AuthorAnn Tonsor Zeddies spent her first three summers on a mountaintop in Idaho, and wanted to be a cowboy until she realized that the frontier had moved off the planet. Her interest in biology began at an early age, when she collected a bucket of assorted amphibians and turned them loose in the tent where she was living with her parents and younger brother. Her brother became a professional biologist; Ann chose to deal with strange life forms by writing science fiction.

Steel Helix is a rich novel with realistic science-fictional details and a fabulous space adventure plot that speeds along like a racecar. -- Victoria McManus, SFRevu