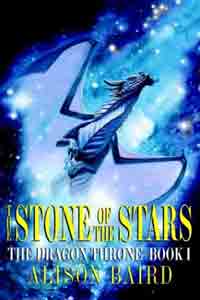 The Stone of the Stars (The Dragon Throne, Book 1)

Synopsis of The Stone of the Stars (The Dragon Throne, Book 1)

This is a beautiful fantasy featuring four people whose quest is to find the coveted Stone of the Stars before the tyrannical God-King of Khalazar finds it and uses it to rule the Earth. Their path will lead them to the mystical isle of Trynisia, once a place where humans dwelt side by side with dragons. Tomboyish and scholarly, Ailia balks at settling down to the proper fishwife's life. But she is unprepared when the enemy forces of Khalazar begin to encroach on the island of her family's home forcing the women and children to flee to the mainland city. Damion was a devoted missionary who finds himself at odds with his religious path when a mysterious scroll describing the location of the Stone of the Stars. If the scroll is truly a fake and the Stone of the Stars a piece of fiction, why are their people willing to kill for it? A half-breed soldier/slave with no home, Jomar must decide how long he will suffer at the hands of his oppressors. Lorelyn was just a foundling on the monastery steps, but now a mysterious coven of clairvoyants are convinced she's a prophesied princess who'll one day guide her people to battle against a dark god.

Reviews of The Stone of the Stars (The Dragon Throne, Book 1)

Baird does a good job gathering a strong cast of characters together...each has their own unique gifts and perspectives. -- Cindy Lynn Speer, Fantastica Daily

This is an enjoyable new fantasy Series, though at times its mythological underpinnings seem a little unwieldy in this first episode. -- Hilary Williamson, Bookloons

Book one of the Dragon Throne Series is everything a reader could want in a fantasy Book. -- Harriet Klausner, BooksNBytes

Although the basic premise has been used many time before, this time it sparkles with original touches and characters. -- Deborah Hern, The Romance Readers Connection