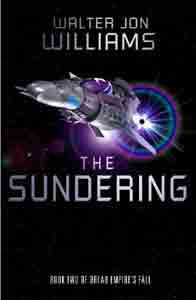 The 10,000 year rule of the Shea is over. After ten millennia of peace, so begins the tale of a dread empire's fall... The alien Naxids have won a shattering victory at Magaria, a victory that clears the way for an advance on the loyalist capital, Zanshaa. To help save Zanshaa comes Lord Gareth Martinez, formerly a despised provincial officer, now, in the aftermath of a brilliant victory, a celebrated war hero. But no sooner does Martinez arrive at the capital than he finds himself entangled in intrigue, first by political enemies intending to deprive him of command, then by his own brother Roland, who wants to use him to further the ambitions of a Martinez dynasty. Destiny also waits for Martinez, in the form of the mysterious survivor Caroline Sula, a woman whose beautiful face conceals a deadly secret, and whose brilliant mind holds the key to victory over the Naxids. While Martinez prepares to engage an enemy fleet that has long been prepared for his assault, Sula is put in command of a guerrilla force that must engage the enemy in a desperate, dirty war fought in the teeming slums of Zanshaa. Both sides claim the legitimacy of the Praxis, but the very real danger exists that there will be nothing left for the victors to rule...

This is wonderful space opera, we have starship battles, galaxy wide politics of a centuries old Empire, and guerrilla-styled street warfare. -- Steve Mazey, The Eternal Night

It's refreshing to read well-plotted space battles that pay attention to the laws of physics. -- BooksForABuck