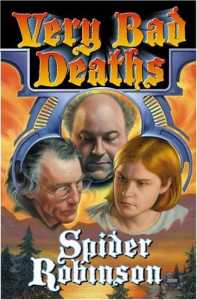 Aging baby-boomer Russell Walker wants only to retreat from the world and the shattering death of his beloved wife, into the woods of British Columbia. But the real world won't let him become a hermit. Instead, he finds himself thrust into the mystery of a Series of mass murders by a monstrous sadist and serial killer who makes Hannibal Lector look like a boy scout. And he is caught in a frightening predicament: He is the only possible intermediary between a telepath called Smelly, so sensitive he can't stand to be near most people, and a skeptical police officer who needs to hear and believe what Smelly knows about the fiend. This involuntary trio may be the only ones who can catch the inhuman butcher before he kills again-if he doesn't catch them first.

All in all, I enjoyed this Book. -- Paul Haggerty, SFRevu

Despite the horrific aspect of Very Bad Deaths, which Robinson clearly wanted to drive home to his readers, the Book is an enjoyable one for the readers because of Robinson's ability to create sympathetic characters. -- Steven H Silver, SF Site

This fantastic paranormal serial killer tale contains four key characters, who seem genuine whether they are depressed, can read and influence minds, have doubts but take a chance, or just sadistically brutal. -- Harriet Klausner's Review Archive