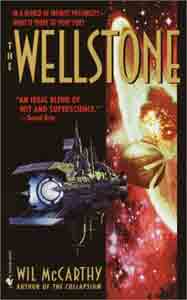 Synopsis of The Wellstone

For the children of immortal parents, growing up can be hard to do. A prince will forever be a prince--leaving no chance for Bascal Edward de Towaji Lutui to inherit his parents... throne. So what is an angry young blue blood to do? Punch a hole in the shadow he's been living in by rallying his equally disgruntled companions to make an improbable spaceship, busting out of the so-called summer camp in which their parents have stowed them and making a daring escape across the vastness of space. Ne...er-do-well Conrad Mursk is just along for the joyride--until he realizes this is no typical display of teenage angst. The children are rising up in an honest-to-gods revolution. And, boyo, things are going to get raw.

Reviews of The Wellstone

...an adventure novel that would have made Robert A. Heinlein proud. -- Gavin J. Grant, Bookpage

What more could any SF reader ask for? -- Paul Di Filippo, Scifi.com