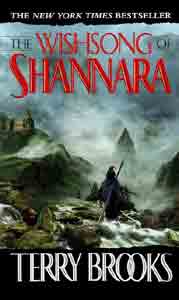 The Wishsong of Shannara

Synopsis of The Wishsong of Shannara

Now, in a brilliant fantasy of magic and high adventure, Terry Brooks brings us the conclusion of his epic trilogy that began with The Sword of Shannara and The Elfstones of Shannara: The Wishsong of Shannara.

Horror stalked the Four Lands as the Ildatch, ancient source of evil, stirred to new life. Once it had sought dominion through the Dark Lord and his dread Skull Bearers. Now it sent the ghastly Mord Wraiths out to create war and destroy Mankind.

And again Allanon, legendary Druid protector of the Races, had to seek aid from a descendant of the Elven King Shannara. For Brin, daughter of Wil Ohmsford, held the magic power of the wishsong. To her, it was only something to make plants bloom instantly or to turn trees from summer green to autumn gold. But to Allanon, it was the only means to penetrate the vile growth that protected the Ildatch. Reluctantly, Brin joined the Druid on his perilous journey eastward.

Behind, her younger brother Jair was soon kidnapped by gnomes and also forced eastward. Then finally freed, he learned from the mysterious King of the Silver River that Brin was doomed to fail and die -- unless Jair could somehow reach her in time!

With a strange band of companions, Jair set out -- through the very heart of evil, where death threatened with every step. And ahead, the Ildatch waited, nursing its plans to trap Brin into a fate far more horrible than death!

Here are strange lands, valiant friends, awesome monsters, and ultimage evil -- as only Terry Brooks can bring them to us! -- terrybrooks.net

Reviews of The Wishsong of Shannara

I would recommend this Book to a person who enjoys strange worlds and even stranger characters. -- Myra Patterson, Pioneer Picks

A person who does not like fantasies or fiction would not like this Book. -- Jesse Oates, Pioneer Picks

Once you start this novel, you simply can't put it down until the last page has been read! -- Groz & Choccy's Virtual Home

Brooks' certainly does just that. I am sorry to say this, but this Book is on the very bottom of my list of bad fantasy novels. -- Thomas Ros...n, Fantasy Webgroup

A powerful look at the destructiveness of self-doubt and the self-delusion evil can wrought. -- Heart o' Glory