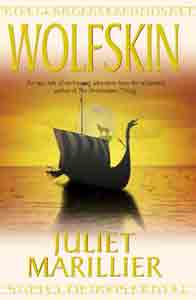 From the highly esteemed Author of the Sevenwaters Trilogy, the first in a brilliant new epic sequence. Growing up on a prosperous farm in Viking Norway, young Eyvind longs for the day when he can become one of Jarl Magnus's elite warriors, the Wolfskins. So begins a story of the far north, set at a time before written historical records began, and full of adventure, rivalry, jealousies, loyalty, love and death -- taking its characters far-distant islands, where living by one's wits can be as valuable as recourse to the sword.

Overall, this was a decent read, but for me it was quite disappointing, because I had expected something as good as Sevenwaters. -- SpearSister, Fantasy Freaks Forum

Wolfskin is notable for its rich historical detail, especially of everyday life in both Norway and the Orkneys, enlivened by her excellent characters, particularly the central figures Eyvind, Nessa, and Somerled. -- Victoria McManus, SFRevu